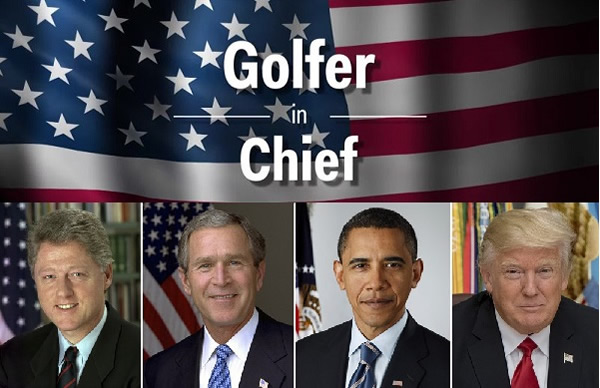 All The Golfing Presidents

Since the game of golf became popular in the early 1900s, most presidents have played – with levels ranging from apathetic to enthusiastic. In fact, only a couple of presidents haven’t played, and they found their own ways of spending their leisure time. Golf and the presidency have been linked ever since William Howard Taft became a visible proponent of the game, talking up its health attributes. It became more and more important for presidents to project an image of physical fitness, while also appear athletic and graceful. Golf was a way to do this.
At the same time as presidents started enjoying golf, they started to be criticized for enjoying it so much so that entire websites are devoted just to counting how many rounds the President has played.

It’s no secret that Donald Trump loves playing golf — whether he can fit in a tee time at a Trump golf course or at another exclusive club. But the reality is that the tradition of presidents playing golf is a long and time-honored one.
Click here to read the entire story.

Take advantage of this limited time offer and save $100!

All CaddyTrek purchases made between February 16th and February 22nd will receive $100 of the retail price of $1495 in addition to a free accessory pack (cup holder & scorecard holder).
president trump brings golf to the whitehouse. Here’s a tasty little nugget for those who criticize President Donald Trump for playing too much golf. 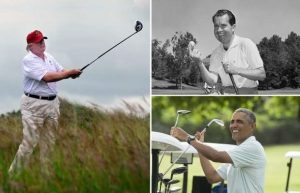 According to the Washington Post, Trump has installed a room-sized golf simulator in the White House.
A White House official, who spoke on the condition of anonymity, told the Post that the system, which was put in during the last few weeks, cost about $50,000 and that the president paid for it personally.

The system replaced an older, less sophisticated simulator that had been installed during President Obama’s time in office.

While the simulator would allow Trump to play virtual rounds at courses all over the world, the source added that he hadn’t used it since it was put in.

Although the White House reported President Trump took a brief hiatus from golf during the recent government shutdown, he’s been spotted hitting the links at his Florida club with Jack Nicklaus and Tiger Woods.

1) Which president was the first to be born as a United States citizen?
a. James Madison
b. Martin Van Buren
c. John Quincy Adams
d. Andrew Jackson

2) Which president had to borrow money to get to his own inauguration?
a. George Washington
b. John Adams
c. James Madison
d. Abraham Lincoln

10) Who was the only president who never got married?
a. Ulysses S. Grant
b. James Buchanan
c. Millard Fillmore
d. Chester A. Arthur