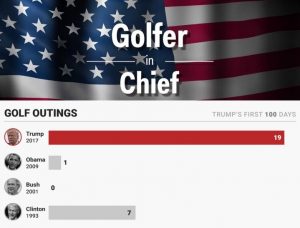 Since the game of golf became popular in the early 1900s, most presidents have played – with levels ranging from apathetic to enthusiastic. In fact, only a couple of presidents haven’t played, and they found their own ways of spending their leisure time. Golf and the presidency have been linked ever since William Howard Taft became a visible proponent of the game, talking up its health attributes. It became more and more important for presidents to project an image of physical fitness, while also appear athletic and graceful. Golf was a way to do this.
At the same time as presidents started enjoying golf, they started to be criticized for enjoying it so much so that entire websites are devoted just to counting how many rounds the President has played.
It’s no secret that Donald Trump loves playing golf — whether he can fit in a tee time at a Trump golf course or at another exclusive club. But the reality is that the tradition of presidents playing golf is a long and time-honored one.
There have been plenty of presidential golfers, including the following:
William Howard Taft
Taft was the first president to let the public know he enjoyed golf, as before that, it was seen as a sport for the rich upper-crust. He was an avid player both during and after his presidency. Sources claim he had a 20 handicap.
Woodrow Wilson
Although Wilson wasn’t very good at golf, for the first half of the 20th Century, Wilson was THE golfing president. He’s thought to have played over a 1,000 rounds while in office. Wilson had specially painted black golf balls designed so he could hit them outside during the winter.
Warren G. Harding
The affable and charming Harding wasn’t an effective president, but he was a good golfer. Harding was the first president to have a golf course named after him, and it was during a 1923 round of golf in Vancouver that Harding first displayed signs of heart failure.
Franklin D. Roosevelt
Before polio robbed him of his mobility, Roosevelt was a regular golfer, well-known for his ability to hit long drives, and for his enthusiastic evangelism of the sport. He never was able to play as president.
Dwight D. Eisenhower
Eisenhower was an incredibly active golfer, playing between 800 and 900 rounds during his two terms, including some on the lawn outside the White House. Eisenhower was criticized for playing too much. He had a cabin at Augusta National Golf Course named in his honor.
John F. Kennedy
The athletic Kennedy was an outstanding player, but kept his golf habit a secret during the 1960 election, due to the backlash against Eisenhower but due to back injury early in his first year; he didn’t play for most of his term.
Lyndon B. Johnson
While most presidents kept politics out of their golf games, Johnson was the opposite. He used golf as a means to an end. He was renowned for refusing to divulge his scores and requesting copious do-overs.
Richard Nixon
Nixon didn’t take up golf until he was VP. But he studied the game hard and practiced often. He played less as the stress of Watergate and Vietnam piled up. He was also known to cheat occasionally.
Gerald Ford
Despite the enduring image of Ford as a klutz who couldn’t make it down a flight of stairs without falling, he was a graceful athlete who had played college football at Michigan. He was also a good golfer with a powerful drive but had a reputation for hitting bystanders at tournaments with his balls.
Ronald Reagan
The Gipper didn’t play golf often but when he did, he tended to play well and to enjoy his time on the links. The most infamous story related to Reagan and golf involves not the game itself, but a hostage situation that broke out while he was playing at Augusta National.
George H. W. Bush
An inductee into the World Golf Hall of Fame, Bush, was known for his low handicap and fast games. After leaving office, he played in numerous tournaments and became friends with many well-known professional golfers.
Bill Clinton
Clinton was probably the most prolific golfer in the White House since Eisenhower, playing around 400 rounds. He enjoyed the sport and was renowned for a strong game. He also had a reputation for benefiting from his status to cajole do-overs and mulligans from his course-mates.
George W. Bush
Bush played frequently before becoming president, often with his father. He had golfed only 24 rounds in office when he publicly gave up the game as a gesture of support for soldiers in Iraq and Afghanistan… He started playing again after he left office.
Barack Obama
One of the more prolific presidential golfers, Obama has received a great deal of criticism for his golf habit. He’s played about 250 rounds in office and often plays with celebrities or old friends. None other than President George W. Bush has defended Obama’s golfing.
Donald Trump
Spending about 25% of his time on the green rather than in the office, Trump is a regular at the golf course. Not only is Trump a prolific golfer, but he owns over 17 golf courses. The government shutdown in 2019 kept him off the course for the longest stretch of his presidency – 50 days.

To the U.S. government, Presidents’ Day is still recognized as “Washington’s Birthday,” though in some states the day jointly honors the birthdays of Washington, born Feb. 22, and Abraham Lincoln, born Feb. 12. And in other states the day is meant to honor Washington and Thomas Jefferson but not Lincoln — or all of the presidents.
Whatever, here’s the annual Presidents’ Day quiz:

1) Which president was the first to be born as a United States citizen?
a. James Madison
b. Martin Van Buren
c. John Quincy Adams
d. Andrew Jackson

2) Which president had to borrow money to get to his own inauguration?
a. George Washington
b. John Adams
c. James Madison
d. Abraham Lincoln

5) Name all six presidents with the first name of James.

6) Who served as president with a musket ball stuck in his shoulder?
a. George Washington
b. Andrew Jackson
c. James Monroe
d. Ulysses S. Grant

8) Who was the first president to be seen on television?
a. Woodrow Wilson
b. Franklin Roosevelt
c. Harry Truman
d. Dwight Eisenhower

9) Four presidents were assassinated. Six survived assassination attempts. How many can you name?

1) a. Martin Van Buren, the 8th president. The previous presidents were born as British subjects.
2) a. George Washington. He was inaugurated in New York City on April 30 but before he left his native Virginia he had to borrow money from a neighbor to pay off his debts.
3) d. Teddy Roosevelt was the youngest serving president, assuming the job at the age of 42 in 1901 when president William McKinley was assassinated. Kennedy, at 43, was the youngest to be elected, in 1960.
4) a. William Howard Taft, the 27th president president, from 1909–1913, served as chief justice from 1921-1930. He was also dean of the University of Cincinnati Law School and U.S. secretary of war.
5) The six Jameses: Madison, Monroe, Polk, Buchanan, Garfield and Carter.
6) c. James Monroe, who dropped out of college at age 18 to fight in the Revolutionary War. On December 25, 1776, Monroe crossed the Delaware and led a charge at Trenton, getting wounded in the battle. He was hit in the left shoulder with a musket ball, which cut his axillary artery. Doctors tried to remove the musket ball but couldn’t, and he lived with it for the rest of his life.
7) d. Lincoln was 56 when he died on April 15th, 1865.
8) b. Franklin Roosevelt, on April 30, 1939, at the opening of the World’s Fair in New York.
9) Presidents who were assassinated: Abraham Lincoln (1865), James Garfield (1881), William McKinley (1901), John F. Kennedy (1963)
Presidents who survived assassination attempts: Andrew Jackson (1835), Theodore Roosevelt (1912), Franklin Roosevelt (1933), Harry Truman (1950), Gerald Ford (1975), Ronald Reagan (1981)
10) c. Jimmy Carter and Ronald Reagan
Carter spoke years about the 1969 incident years later. “”It was the darndest thing I’ve ever seen. It was big, it was very bright, it changed colors and it was about the size of the moon… We watched it for ten minutes, but none of us could figure out what it was. One thing’s for sure, I’ll never make fun of people who say they’ve seen unidentified objects in the sky.” Reagan told a Wall Street Journal journalist that he was in a small plane in 1974 when they spotted a UFO.