5 TIPS ON READING THE GREEN… AND SINKING MORE PUTTS 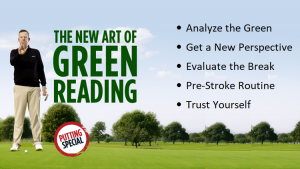 When golfers talk about the “grain” of a green they are referring to the texture the grass makes by the direction it’s leaning. The “break” is the direction the green will try and pull your golf ball. Break is mostly influenced by the grain and topography of the green.

WHAT AFFECTS THE GRAIN OF A GREEN?

Sometimes grass is groomed to intentionally lay the grain in a certain direction. This might be done to make a green more challenging or to assist golfers on a trickier shots.

The grain of the green is also affected by the position of the sun in the sky. Blades of grass will reach towards the sun as it moves across the sky, so the grain might vary slightly throughout the day. Also keep an eye out for nearby water sources like ponds or creeks; the grain will usually run towards water. 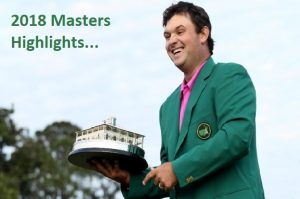 But the controversial American won’t let that take the shine off his first major triumph, secured Sunday after the challenges of Rory McIlroy, Jordan Spieth and Rickie Fowler all fell away.

“Honestly, it doesn’t really concern me,” the 27-year-old, who finished 15-under par for the tournament, told CNN Sport’s Don Riddell. “I am who I am.”

“You know that once you’re successful, there’s going to be good things and bad things that people say and, honestly, to me it doesn’t really matter.”

A large amount of the patrons who lined the course at Augusta National arrived in hope of seeing McIlroy complete a career grand slam of golf’s four major tournaments.

Over the four days of the Masters, Reed kept his calm and used the agnosticism from parts of the crowd to fuel his challenge for the right to wear the tournament’s green jacket.

MASTERS SHOT OF THE WEEK

Shot of the week was reserved for the last day as American Charlie Hoffman as he aced the par-3 16th for the first hole-in-one of the tournament.
https://twitter.com/TheMasters/status/983081580284428288

It was the 20th ace in Masters history at the 170-yard hole as his six-iron narrowly missed a bunker before rolling into the hole.

JORDAN SPIETH’S CADDIE… A VITAL PART OF THE TEAM 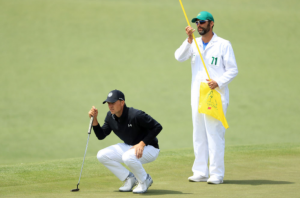 Michael Greller, caddie to Jordan Spieth, proved once again why he is such a vital part of the young player’s game in Augusta National.

hasing Patrick Reed on the leaderboard at the Masters, Spieth found himself in the pine needles after his drive on the par 5 No. 13 before making a brilliant second shot, setting himself up for an eagle putt.
“Four iron right?” Spieth initially asked while also mulling the possibility of hitting the hybrid.

“I like the hybrid better than that,” Greller responded, as the duo mulled over the decision.

Eventually, Spieth went with Greller’s advice, putting the iron back in his bag in favor of his hybrid. The aggressive move immediately drew a reaction from the crowd, and with good reason — Spieth would land his shot unbelievably close to the pin to set himself up for an eagle putt.

It’s not the first time Greller has helped his player at a crucial moment in a tournament.

THE CADDIES AGAINST THE PROS… ALL FOR A GOOD CAUSE! 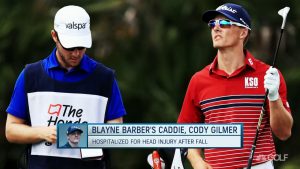 Cory Gilmer, Blayne Barber’s caddie who suffered a severe head injury in a fall on Jan. 12 prior to the third round at the Sony Open, is out of the hospital and recovering at home in Alabama, but he still has a long road ahead.

Barber said although Gilmer is making steady progress, there is still plenty of rehabilitation, which is why a group of PGA Tour players and caddies gathered at a mini golf course on Tuesday night in Hilton Head.

The competition between the caddies and professionals was the most recent fund raising effort to help Gilmer pay his medical bills and defer living expenses while he recovers.

“Events like this is what really brings people together,” Barber said.

Barber held a charity tournament at his course in Auburn, Ala., last month and that a GoFundMe page for Gilmer has already produced about $65,000. 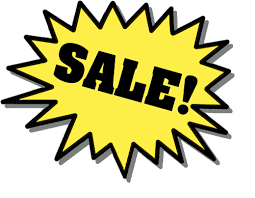