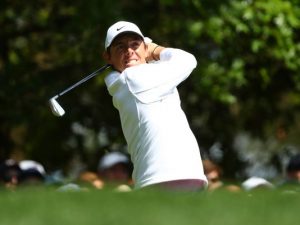 After driving off Magnolia Lane following his disappointing finish in the Masters, Rory McIlroy basically went into hiding for seven days.

“I went back home and sort of decompressed, binge watched a couple of shows, read a couple of books, drank a few bottles of wine,” McIlroy said.

He did everything he could to keep his mind from wandering back to Augusta National and the Masters, where the four-time major winner’s chance to complete the career Grand Slam crumbled with a final-round 74 that left him in a tie for fifth.

His decompressing put him into a funk that only his wife Erica could pull him out of. “My wife had to drag me out of the house and say, ‘OK, we’re going to go do something.’ I said, ‘OK,’ and once I got back in my sort of routine, I was fine,” McIlroy said.

A green jacket is the only thing standing between McIlroy and the career Grand Slam, and this year’s tournament was his best chance to break through into that elite company. So a few days sulking is understandable. 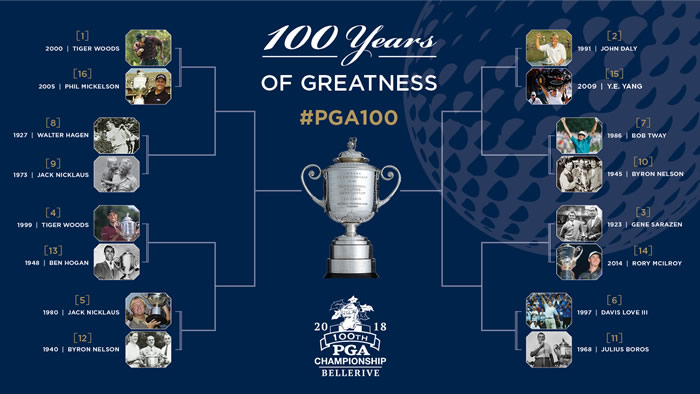 In the buildup to the 100th PGA Championship at Bellerive Country Club in St. Louis this August, the PGA of America is asking fans for help identify the greatest PGA Championship ever played.

The list was whittled to 16 Championships, which will play out in a bracket format. This was done to make it easier for the fans.

“I think it will be fun to watch and see who the fans pick as their favorite PGA Championship moment,” said 1997 PGA Champion, Davis Love III.

Beginning this summer, and through the final round of the 100th PGA Championship, fans will vote to determine the best Championship of the 16.

The bracket ranges from Walter Hagen v. Gene Sarazen in 1923 to Rory McIlroy edging Phil Mickelson at dusk in a Bluegrass thriller in 2014 at Valhalla.

So how were the 16 seeds established?

The group voted on the 99 PGA Championships played since 1916 and the seeds were set based on number of votes received. The “bracket” concept was developed to create a format that would resonate with fans and spark a healthy debate.

“This is a unique moment in time for the PGA Championship,” said Jeff Price, PGA of America Chief Commercial Officer. “Our goal is to create dialogue leading up to and during our 100th [PGA Championship] around these great moments and great championships.”

So, which of the 99 PGA Championships will be No. 1 when the dust settles?

That will be up to the fans.

Days after turning 21, Lydia Ko is surrounding herself with family and friends and soaking up good vibes on a golf course she loves as she seeks to end a victory drought.

The former No. 1 shot a 5-under 67 at Lake Merced for a one-shot lead over Jessica Korda at the LPGA MEDIHEAL Championship.

Ko has two previous victories at Lake Merced among her 14 LPGA Tour wins, but she hasn’t won since July 2016 and has changed instructors twice since then, along with switching caddies and equipment.

In an article published from The Associated Press, Lydia Ko said “I love San Francisco and I’m a member here, so sometimes I get some friendly member bounces. But it brings back a lot of good memories for me.”

The New Zealander ended the three-day championship with a total of 11-under 205 which was enough to overtake Korda, who shot 71. Minjee Lee (68) was three shots back. 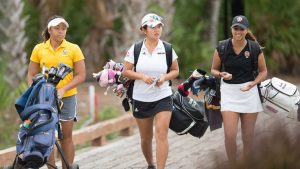 The 32nd PGA Minority Collegiate Championship, the most diverse and culturally significant Championship in golf, will take place May 10-13 on the Ryder and Wanamaker Courses at PGA Golf Club in Port St. Lucie, Florida.

While many of the participating teams represent historically black colleges and universities, the individual competition is open to any minority men and women student-athletes playing collegiate golf at the Division I, Division II or NAIA levels, or participants who are enrolled in one of the PGA of America’s PGA Golf Management University Programs.

One of the most important aspects of tournament week is the PGA Minority Collegiate Championship’s Career Expo, where participating student-athletes learn about employment prospects in the global golf business as well as opportunities beyond golf.

The PGA Minority Collegiate Championship originated at a meeting in November 1986, following the Jackson State University Golf Tournament. The founders’ goal was to elevate the game at minority colleges and universities by giving them an opportunity to compete in a championship in an era when they were excluded from playing in many collegiate golf events. The inaugural Championship was conducted in the spring of 1987 at Highland Park Golf Course in Cleveland.

THE DISTURBING TREND…
FROM THE NAPA WINE TRAIN TO STARBUCKS, LA FITNESS, & NOW THE GRANDVIEW GOLF CLUB IN PENNSYLVANIA 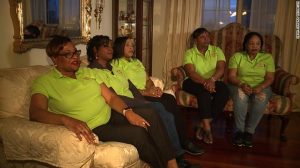 Do we have to add “golfing while black” to the list of things we cannot safely do without fear of police violence? The story of five black women who were asked to leave a York County golf course for reportedly playing too slowly is making headlines and causing outrage across the country.

The group of regular golfers said they were confronted at the second hole by Steve Chronister, one of the owners of the Grandview Golf Course and a former county commissioner, who accused them of lagging and offered to refund their money if they would leave.

They were the only African Americans or all-female groups on the course, according to Sandra Thompson, who posted a detailed account of her experience on Facebook. After the 9th hole, another owner called police on them, she said, noting they had been asked three times to leave.

Thompson wrote on Facebook they felt they were being discriminated against. “As we waited and as we spoke to police,” she wrote, “no other group approached Hole 10 to tee off, so for about 20-30 minutes there was no one behind the group who were behind us.”

The owners of the Grandview Golf Course in York weren’t available on Tuesday for comment. Another owner issued an apology to Thompson and invited them back to play.

It’s unlike anything you’ve ever seen!

One of golfs biggest attractions, TOPGOLF, is coming to Atlantic City. Ocean Resort Casino is bringing virtual golf to the Boardwalk with this summer’s opening of casino-hotel. Officials said “Topgolf Swing Suite at Ocean Resort will be the largest in the world.”

The golf attraction will feature 11 golf-simulator bays, a first-of-its-kind virtual putting green, interactive multi-sport games, HDTVs and lounge seating for up to eight people to “play, eat, drink and hang out in each bay while enjoying some of the most impressive views in Atlantic City.”

Ron Powers, president of Topgolf Swing Suites, said the new attraction will be “unlike anything the entertainment industry has seen before.”