The Debate Over The Flagstick…

Which is the best way to putt, in or out?

Mase has been on the vanguard of golf equipment research for much of his 30-plus years in academia, as well as stints at both Callaway and Titleist and as an original and long-time member of the Golf Digest Hot List Technical Advisory Panel.

HIS RESEARCH ON THE VALUE OF LEAVING THE FLAGSTICK IN WAS PRECISE, PAINSTAKING AND PERFECTLY CLEAR. 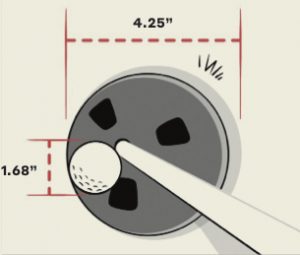 His findings upend the conventional wisdom that the flagstick is some kind of backstop, gathering wayward putts back into the hole.

The facts of his study suggest the opposite, that the flagstick does much, much more to hurt your chances of a putt going in than help turn a bad putt into a made one.

The testing was performed with a special putting device built to roll putts accurately aimed with a laser—and a true, pure roll—from two feet away. We rolled putts at different speeds hitting different parts of the pin on flat, uphill and downhill sloping greens. The test results were conclusive: You will hole a higher percentage of putts when you leave the flagstick in.

The reason for this effect is that a significant amount of energy is lost from a putt’s speed when the ball hits a fiberglass flagstick. The speed-loss enables gravity to pull the slower moving ball down into the hole more often. Even though balls have changed since my testing, holes and flagsticks have not, and the “energy-loss” effect will still win the day.

GOLFERS HAVE 3 OPTIONS WHEN PUTTING

Thanks to a rules change by the USGA, golfers can either remove the pin completely, have someone tend the pin, or leave the pin in and unattended. If your putt hits the pin in the third scenario, there’s no penalty (formerly two strokes or loss of hole).

IT’S A MAJOR CHANGE IN THE NAME OF SPEEDING UP PLAY.

In a statement on its website, The USGA says there “should be no advantage in being able to putt with the unattended flagstick in the hole.”

But before you decide how you want to putt, let’s review some facts:

This doesn’t sound like much space, especially if the pin is leaning slightly toward the golfer. This effect, however, has been tested

There’s a lot of science behind the research, but the studies conslucsively show that you should putt with the pin in!

To make you feel better about leaving the pin in, think about how many long putts and chips you’ve seen crash into the pin and still stay in the hole. If you’re watching golf on TV, you’ve also seen several shots fly into the hole directly from the fairway and stay in.

Test the new rule for yourself. Putt 12 balls from a three-foot circle all the way around the hole. Do the same drill for six-foot putts. Repeat this drill 10 times on 10 different days, and keep tab of your results.

Whether or not this test makes a believer of you, you will have forced yourself to practice your putting, putting you a solid step ahead of your foursome.