How dirt impacts the shape of your shots.

As confusing and confounding as The U.S. Open is, imagine golf’s version of Russian roulette known as the mud ball.

You piped your drive down the fairway, but your ball picked up a clump of mud along the way—a common occurrence in soft conditions. Barring a local rule that lets you lift and clean the ball, you’ll have to play it as it lies and deal with the dirt.

Mud on a ball can have a significant effect on trajectory, distance and in-flight curvature.

The trouble is no one can really predict what that effect just might be. Nobody’s quite sure.

Rock Ishii, director of golf ball research and development at Nike, has studied the mud ball conundrum for years. He has some specific answers, but concedes, “It all depends on how much mud is on the ball,” he says, indicating the distance loss on a 200-yard shot might be as much as eight yards and that if there’s mud on top of the ball a shot will tend to spin too much and balloon up in the air.

He also believes the ball will curve in the opposite direction of the side of the ball the mud is on. “That’s the basic tendency, but if there is too much mud, the ball starts going the same direction as the side the mud gets on. We don’t have enough knowledge what amount of mud turns it to the opposite.”

The main problem with the physics of a mud ball is that there are so many variables, and several of these variables conflict with each other.

WHY NO ONE CAN AGREE

If the mud gathers on only one side of the ball it will slightly change the ball’s center of gravity toward that side. Thus making it off-center compared to a clean ball or, more simply, lop-sided. The off-center effect means the ball is going to rotate and curve in the direction of where the extra weight is. All things being equal of course.

Deciding how a muddy ball will affect your shot’s trajectory has always been a guessing game. It’s been assumed that as the ball flies, the mud creates air resistance—or drag—that sends the shot in the direction of the ball’s soiled side. So mud on the ball’s left quadrant, for example, would tug the ball to the left. But there’s never been compelling data to confirm or refute this

They used weighted lead tape to simulate a 1.9-gram chunk of dirt (a bit less than the width of your thumb) clinging to various locations near the ball’s equator. They then compared these 400 swings with some mud-free base swings, and then tallied the results.

Contrary to conventional wisdom, every single “muddy” ball curved in the opposite direction of the sphere’s dirty side (results, right). It’s clearly time to rethink our assumptions about mud’s effect on ball flight.

TIPS ON HOW TO HIT A MUDBALL ACCORDING TO TIGER WOODS 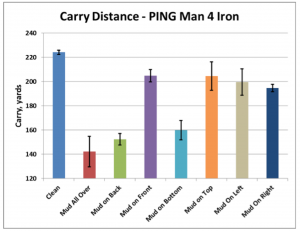 Your best bet is the “half inch” approach according to Woods. Choke up on your club 1/2″ more than usual, with the ball back a 1/2″ further than normal.

The power should be generated from your shoulders, with a quiet lower body and feet firmly planted on the ground. A sweeping backswing and standard follow through is the final step in making the best of this situation.

You need to approach a ball stuck in the mud differently than one just muddy. To increase your chances of successfully dislodging the ball, use a pitching wedge or a 9-iron. Begin with an open stance and the ball moved back past the middle of the stance.

Use a firm grip and swing across the foot line with a downward approach. This will free the ball and send it forward toward your target. It may seem the sand wedge is a more logical choice, but it isn’t. Why? Risk of the club digging into the ground.

HERE ARE SOME MORE TAKEAWAYS TO KEEP IN MIND, BASED ON THE STUDY: